The SoCal rockers played an energetic concert at the Ace Hotel in Los Angeles as a fundraiser for presidential candidate Senator Bernie Sanders.

Every time Anthony Keidis or Flea mentioned Senator Sanders, the beyond-capacity crowd of over 1,600 went into a frenzy—all while the man of the night was 2,700 miles away, campaigning in New Hampshire. 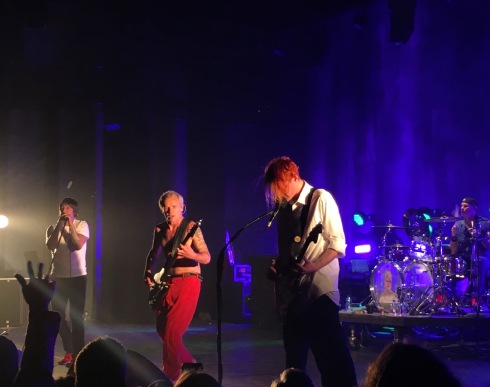 It had all the trimmings of a typical campaign event: rows and rows of “Bernie 2016” signs, and volunteers armed with clipboards selling shirts, hats, and stickers.

Shepard Fairey, the artist behind the Obama “Hope” poster, designed the poster for the event and was in attendance as well.

The price of admission was bound to have generated a modest boost in funds for Senator Sanders. Although tickets prices started at $40, they soared up to $2,000 for a front-row seat and a meet-and-greet with the Chili Peppers. Undoubtedly, many volunteers and fans received comped tickets

The Grammy Award-winning group offered to do more, but Senator Sanders stood by his anti-large donation pledge.

“We offered to pay for the rent for the hotel and Bernie would not accept,” Keidis explained in a radio interview on KLOS.  “[Bernie] said ‘no I can’t take your money, that’s not how I work, I’m not taking those size contributions from groups, corporations, anything at all.’”

As the house lights dimmed to start the show, a two-minute taped video featured Senator Sanders thanking the crowd and the band for their support. From there, the band launched into a 12-song set-list that began with “Can’t Stop.”

Keidis then told the crowd that he’s supporting Bernie because he’s the “cutest candidate,” among other reasons. Sanders already has the endorsement of a plethora entertainers.

Then all four Chili Peppers adorned “Bernie 2016” hats, took a group photo, and bounced into their 1999 hit song, “Around the World.”

Sanders wasn’t the only one getting support from the Chili Peppers. They played homage to their recently departed idol and friend, David Bowie, with a cover of the song “Cracked Actor.”

And at center stage throughout the night, Chad Smith’s drum set featured a basshead with Bowie’s face.

BRIAN FISHBACH is a music journalist based in Los Angeles. Brian previously worked as a staffer in the U.S. Senate. You can find his stories about rockstars at www.BrianFishbach.com

This entry was posted on Saturday, February 6th, 2016 at 1:44 pm and tagged with bernie sanders, david bowie, red hot chili peppers, rhcp, rock music and posted in Entertainment Journalism, Music. You can follow any responses to this entry through the RSS 2.0 feed.
« It Is Never Too Early to Change the Early Presidential Primaries
The Burden of Swapping Musical Partners »